The Addison Park District was formed in 1969. It grew out of the prior Village of Addison Recreation Commission. When the district was formed, a number of parks were immediately deeded to the park district. These eight original parks consisted of approximately 50 acres. As of today, the District has 25 park sites encompassing more than 280 acres. The park district consists of nine square miles and serves a population of approximately 37,000.

In an effort to fulfill the mission of the Addison Park District; to provide the highest quality recreational opportunities and open space for everyone, the Park District has established the following goals. Each goal will be attained through a set of realistic objectives.

This program promotes a united effort on the part of all agencies to provide children with the same message. Each day we are bombarded with negative images in the news and media. Addison, as well as other communities, are trying to bring back the positives. Character Counts is a program that helps children and adults focus on building and becoming good citizens.

Addison Park District incorporates the six pillars of Character Counts into all our programs. Instructors learn the program and in turn incorporate the pillars into their instruction.

Teamwork and sportsmanship are the keys to a good team, not only in sports but in life. This is why the Addison Park District has joined the Village of Addison, District #4, District #88, the Police Department, the Library and so many others to bring this positive program to the residents of Addison and everyone we serve.

The Addison Park District mission is to provide the community recreation opportunities through quality recreation programs, facilities, and open space.

Tell Us What You Think

The Addison Park District welcomes input from its residents. If you have any comments or suggestions about this website, our parks, facilities, services, programs or events, please share it with us by CLICKING HERE!

Learn more about our Board of Commissioners, upcoming meetings, and agendas, and read the minutes of past board meetings. 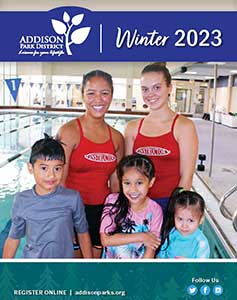 Our Current Brochure
Our Previous Brochure

Locate a park or facility